You may have noticed by now that whenever I meet people I tend to analyze like crazy on the true meaning behind their actions or words. Simply put, there is usually so much depth behind people’s words in general where listening to what a person is “really saying” requires you to translate their words. In a sense, it’s almost like I am constantly repeating their own words and processing it quickly to see if I understand it based on my “vocabulary” when it comes to actions and forms of expressions. It’s virtually no different than how when you learn a second language often times in people’s head it translates the foreign language into their native language first.

To better explain this, I was remembering back to one of my assignments where the task was to choose a piece of writing where we felt the story and character of the situation was so far beyond ourselves in real life that breaking it down emotionally will be a challenge. I ended up choosing this piece called “Foolin’ Around with Infinity” as it sounded like it dealt with rambunctious adults who were into things like drugs. So yeah, this was definitely a challenge for me.

So for the assignment we had to break down what the character was saying and attach our own action words and titles to the piece. Basically, if successful this means we should have technically been able to translate the person`s emotions precisely in a way that we ourselves can understand and relate to. This was literally what my assignment looked like and just a little warning it does have some vulgar language(Bold letters are my own words): 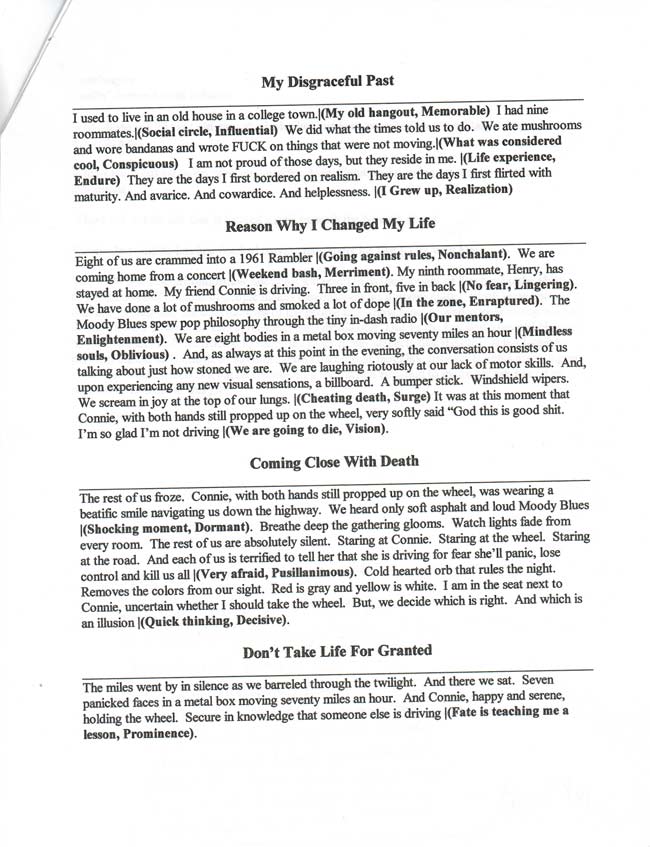 In many ways too it`s almost like I am paraphrasing the stuff that I hear and see all the time. But hopefully this gives you kind of a good visual example on what it is like to be me when it comes to meeting people. If you read those words just for what it was on a surface level I think you agree that it wouldn`t really tell you all the emotions and intentions behind it correct? In terms of things like relationships as an example where you are trying to get the guy`s attention or people asking what things like certain eye contact can mean, imagine stuff like this going through one`s head.

I know for me in many cases I would just have to sit back and digest everything to see if it makes sense. As mentioned previous times too, a person like me then wants to see people in different scenarios to try and conclude if we are in a sense translating all your words and actions correctly. If you think about it, everyone is different which in a sense it`s like I am learning a new language whenever I listen to new stories or actions from people.

Sure where even with different cultures everyone may have similarities in reactions to express certain emotions. But the choice of words and the style that it is used to communicate is always a different adventure I find.